When we started planning our Ireland vacation I told my wife that Giant’s Causeway was the number one tourist spot I wanted to see in Ireland. The majority of our trip was to be spent in Ireland but we knew we’d spend at least a day in Northern Ireland. We originally were going to fly into Belfast and then out of Dublin but we purchased plane tickets in and out of Dublin for around 500 dollars cheaper. My wife slept on the plane and we drove from Dublin to Belfast after an overnight flight. That wasn’t my first choice and I was nervous the entire flight over. I did not sleep. We got our luggage and went to the Dan Dooley counter. We booked with them because they have such a good reputation on travel sites and I was able to get a few personal recommendations from former high school classmates who had also traveled to Ireland. They aren’t expensive in comparison to other companies and I liked that it was an Irish company. We upgraded the car to a Diesel, it was a Volkswagen. A little bigger than we had planned on but it worked out well.

We made it to Belfast without too much trouble. There were a few moments that I wanted to scream. The streets are very narrow in the city. Luckily there weren’t a lot of people out and about (it was a Sunday) so that was a relief. I’m sure had we flown in Monday-Friday it would have been worse. We checked into Tara Lodge on Cromwell Street and allow me to gush about this hotel. There is a small parking lot (and by small I do mean small) plus street parking. We were able to snag a spot in the lot. We arrived at the hotel around 2pm so we were able to check in. Our room was lovely. It overlooked the street but even with the windows open we didn’t hear much noise. It was small but not too small and very clean. We took showers and then went for a walk. We had a taxi tour booked to see the political murals. That was basically the entire reason for staying 1 night in Belfast. We stood outside in the rain for almost 40 minutes and the tour guide never showed up. We were incredibly disappointed. They have a great rating on Trip Advisor so it must have been a fluke. Disappointed we went and got some food, came back to the hotel and went to bed. We had stayed up all day to make sure we were awake for the tour so we were exhausted. We both woke around midnight and were wide awake. We decided to each take a melatonin because we could not deal with jet lag when we knew we would be doing a lot of driving in the morning. That helped and we both fell asleep again and slept until the alarm went off.

The next morning we woke up fairly early, took showers, got ready, and went down for breakfast. The Irish can throw down some breakfast! There was a small spread on the bar but also a menu. We both ordered pancakes and bacon and, well, let me just say that I wish I could have that bacon every day. It was so yummy. The hotel isn’t very big and it was so quiet so we were surprised at how busy the breakfast room was. Oh, and breakfast was included in the price of our room. So a double score!

We went back to the room, grabbed our luggage and checked out by 8am. Our first stop was the Dark Hedges (Game of Thrones fans know all about this). Boy, were we lucky when we got there. We made it before any tour buses were there to block the view. There were 3 women leaving as we pulled up and we the hedges all to ourselves.

There is nothing quite like the Dark Hedges. They are mystifying. I only wished for some fog to really get the feel of them. 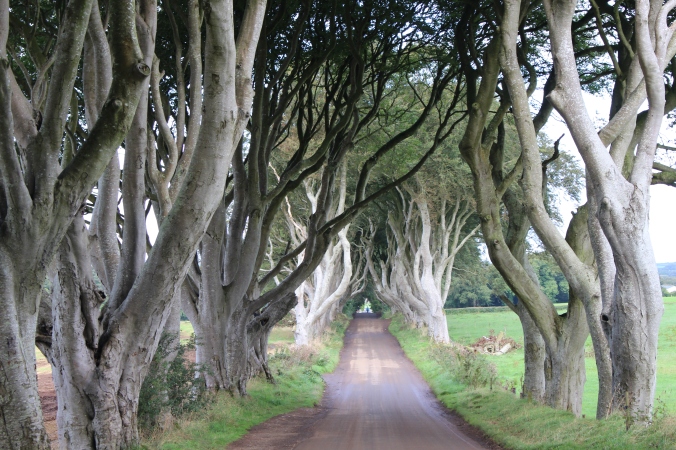 We didn’t stay very long because we still had an hours drive to Giant’s Causeway  We made it in good time, paid for parking, paid the entrance fee and took the hike down. We arrived semi-early so not many tour buses were there yet and the parking lot wasn’t even half full. Giant’s Causeway is everything I hoped it would be.

It really felt out of this world. Landscapes have never been a favorite subject for me to photograph but I think it is damn near impossible to take a bad picture in Ireland. 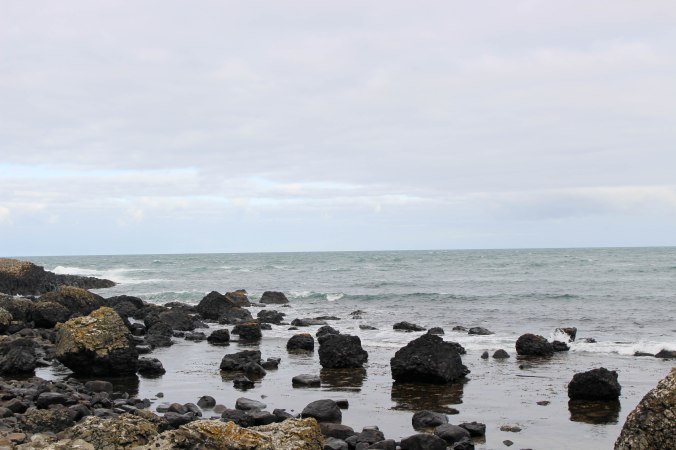 I knew ahead of time to wear sensible shoes because I thought it went without saying but please, wear good sturdy shoes. I didn’t trip once (which is a surprise) but it would be easy to do. I get a little shaky when I get too high up with nothing to hold onto so I didn’t do anything crazy on the causeway. There are workers stationed throughout to help you if you trip and fall. They will also yell at you if you try to climb onto rocks that are off limits. I saw it happen, please listen to them when they tell you to stop. 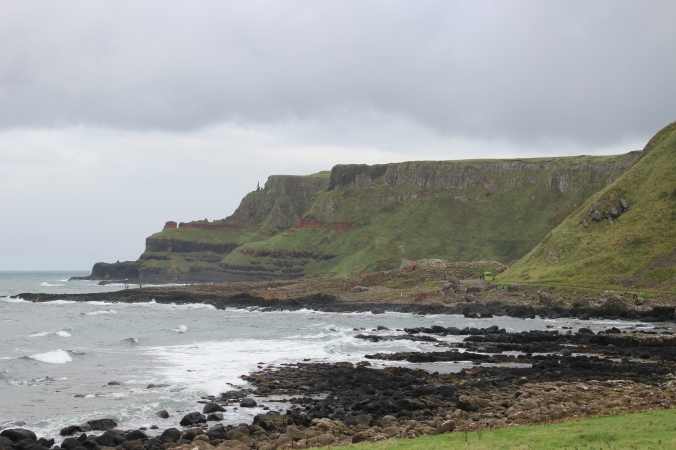 We stayed at the causeway for around an hour and a half to two hours. As we were hiking back up more and more people were walking down. We stopped in the gift shop and bought a few postcards, souvenirs, and a small piece of art that we are going to hang up somewhere in the house. As we were leaving we asked a street worker named Sammy where to eat nearby. He gave us a good recommendation right in Bushmills. A cute little cafe called Copper Kettle. We were not disappointed. It’s not a fancy restaurant by any means but it hit the spot. I had the vegetable soup with some wonderful soda bread. I liked the bread so much I wanted to ask for an entire loaf! My wife had (randomly) a baked potato with cole slaw and she said it was the best cole slaw she’s ever had. She liked it so much she found a recipe for it online and made it when we got home!

We left Bushmills to head to County Sligo. It was a long majestic drive. There were times I felt like we were on top of the world…